The Cowboy hat, synonymous with the North American Cowboy was designed in 1865 by John B. Stetson. Drawing on influences from 19th century Mexican culture the types and designs of cowboy hats have morphed from a felt hat providing excellent sun protection and durability to a fashion statement more commonly seen today. Although today’s style of Cowboy hat does not identically match the style Mr. Stetson originally manufactured (Known as the “Boss of the Plains”), the modern cowboy hat remains basically unchanged in construction and design.

The Original Cowboy hat design had a tall rounded crown and wide flat brim, typically made of felt, straw or even sporadically leather. The inside of the hat is fitted with a simple sweat band to help stabilize the hat while being worn. The Customization of the hat begins at the creasing of the crown and the rolling of the Brim; this gives the Modern Cowboy hat a differentiation of style. At times, a decorative hat band is added to the hat to help accent its features. Cowboy hats can be manufactured in any color, but most traditional cowboy hats feature shades of Beige, Brown or Black.

The More Modern Cowboy hats are typically adorned with bows or buckles attached to the left side of the hat band. This, at one point, served a practical purpose as most people were right handed and the additional ornaments could interfere with the use of a weapon. The Modern Cowboy hat quickly went from functionality and practically to a fashion statement as “Western Movies” became prominent. Entertainers such as Tom Mix and John Wayne influenced the hat market making it stylish and trendy to wear. Cowboy style hats have even become standard issue and part of the uniform for agencies such as the Texas Rangers and the Royal Canadian Mounted Police. 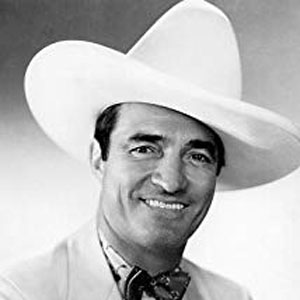 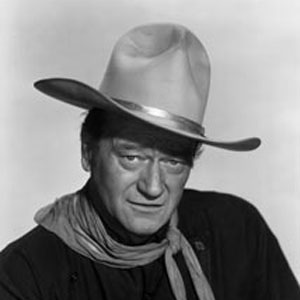 How to Determine the Style

Typically, the crease in a Cowboy hat gives the hat an individual character and helps to identify the wearer to their particular “subculture”. Functionally, the crease helps to don or remove the hat by grabbing the hat by the crown, rather than the brim. To the average hat wearer, these changes may not seem like a lot, but each style carries its own individual meaning and functionality that helped make the Cowboy hat into what it is today. Below are some examples of popular creases:

The most traditional and well known crease, the Cattleman Crease, is the oldest crease found in cowboy style hat.  This style started when ranch owners wanted a differentiation from the Rodeo Cowboy look. The Cattleman features a taller, but narrower crown typically between four and five inches tall, a single crease down the center of the crown with two creases along the side. Functionally, the larger crown was used during high winds or rain, as the cowboy would pull their hat down further over their head so it would not come loose and fall off. The Cattleman Crease is also considered to be the Gentleman’s choice of Cowboy hat styles making it a common sight at weddings and parties. The Cattleman crease is not exclusive to Felt Cowboy hats as many manufacturers have adopted the style in the Straw Hat lines.

The Cattleman Hat does have minor variations in style depending on its wearer. One of the more popular stylistic changes has been deemed the “Gus Hat”. Sticking with all of the traditional creases that make up the Cattleman, the Gus Hat pinches the front of the crown almost giving the hat an outback style look.

The Stampede Studded Brown Stallion Cowboy Hat  embodies the classic Cattleman Crease. Unlike most felt hats, this hats features Bangora Straw, and has a vented crown for maximum breath-ability. 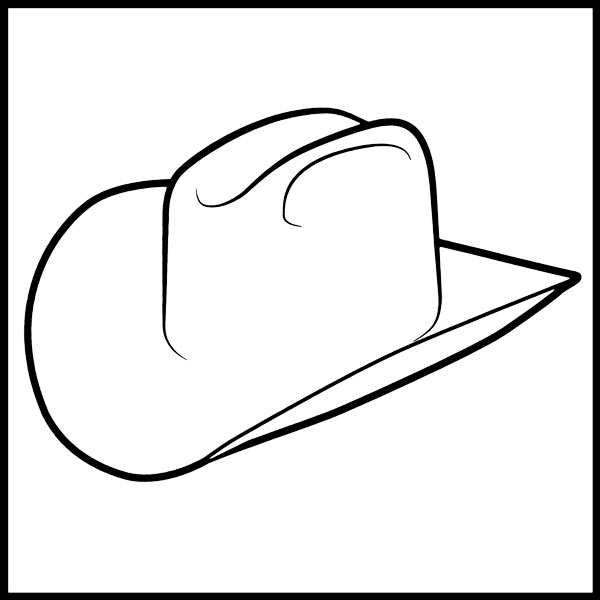 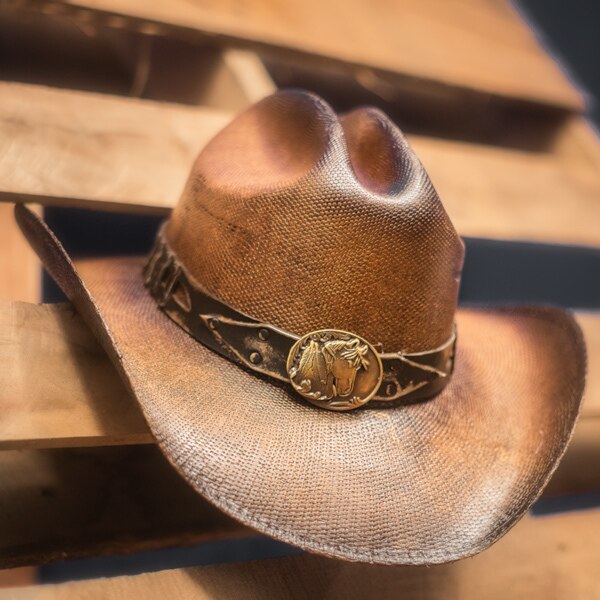 The Pinch Crease encompasses two common style crowns, the tear-drop crown and the diamond crown; both styles are typically seen on formal fedoras, trilbys and outback style hats. The Pinch Front Cowboy hat differs from the typical Fedora in that the brim is typically larger and sports the traditional Cowboy Style. Some Pinch Front Hats take the shape and form of the traditional outback style hat as the “Western Hat” and “Outback Hat” have almost merged into one style. Women tend to prefer the Pinch Front crown over the other traditional cattleman crease. The Pinch Front tends to accentuate narrower and more delicate jaw lines and can help make the wearer’s face to appear thinner.

The Stampede Black Stained Cowboy Hat w/ Chain is a great depiction of the Pinch Front Crease. It features the Pinch Front crown, the upturned brim and is made of a lightweight straw making it a comfortable wear. 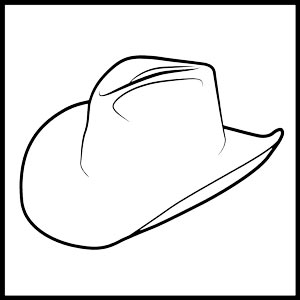 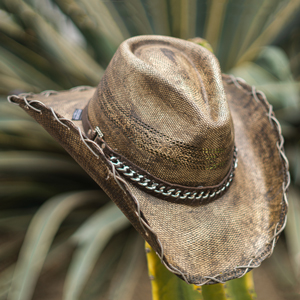 The Montana Crease derives from the state it is named after, Montana. This particular crease is similar to the Cattleman with a few distinct differences. The indentations on the sides of the crown are smaller and less pronounced than on the back of the crown. The center dent is more pronounced and pinched on the front, but far less pronounced on the back of the crown. This creates the look that the hat crown slopes downwards to a point and crests high on the back; while The brim follows the traditional Cattleman Style. In the Northern parts of the United States, this hat is deemed the American Cowboy hat as for a long time this style was exclusive to Montana and counties close to the state lines.

The Tom Mix Crease is a take on the Montana Crease with a more pronounced pinch on the front of the crown and a Brim that has a ½ inch upturn. Tom Mix set the precedent for most hats in fashion during the 1920’s and 30’s as a Hollywood Icon. He is considered the original cowboy movie superstar and influenced fashion that would see Presidents and Prime Ministers of his era attempt to emulate his stylistic look. Next to John B Stetson, Tom Mix is one of the most influential Cowboy Hat wearers to date. 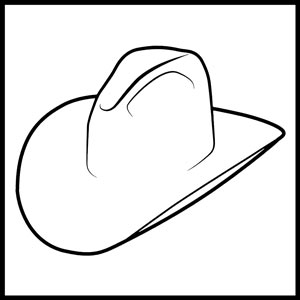 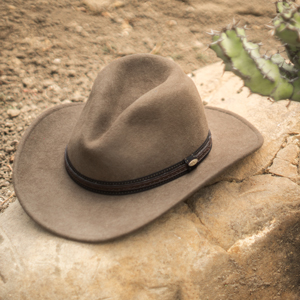 The Telescope Crease, or the Gambler Cowboy Hat, derives from the Mexican Cowboys or “Charros” who traveled from South America and Mexico to Nevada for work. The Lower crown height stops hot air from accumulating making it a cooler hat, and the flat wide brim provides excellent Sun Protection. The Telescope Gambler is similar to the Bolero and is most commonly made out of fur or wool felt. Many other styles of hats have derived from the Telescope Gambler, one of the more well-known hats being the Porkpie made famous by Brian Cranston’s character in the hit TV show Breaking Bad. The Telescope Gambler is more or less creaseless as the crown is completely rounded on the top with a small circular indentation in the middle of the crown, emulating the look of a lens on a telescope. Its functionality outweighed its fashion as it was built for hard labor in the sun. 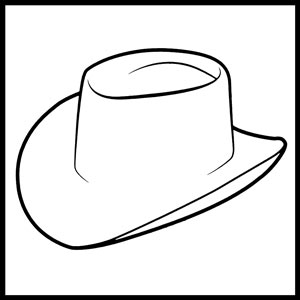 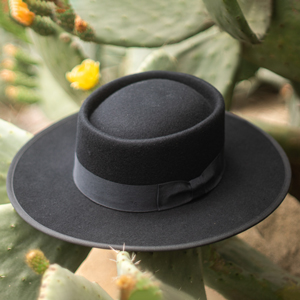 The Open Crown Crease is just a formal name as the crown of the hat actually is completely rounded and lacks a crease. The Crown resembles something more of a sombrero and has famously been tagged as the “10 – gallon hat”. This term is believed to have caught on as cattle drives and ranchers in Texas and the Southwest would cross paths with Mexican vaqueros who wore hats with braided hatbands – called “galóns” in Spanish. The “10 galón” sombrero was a hat with a large enough crown to hold 10 hatbands. The Brim of the hat either sports the traditional sombrero with a small ½ upturn on the brim, or the Cattleman style upturn on the sides of the brim. 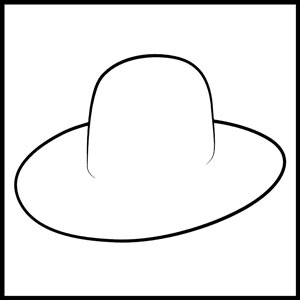 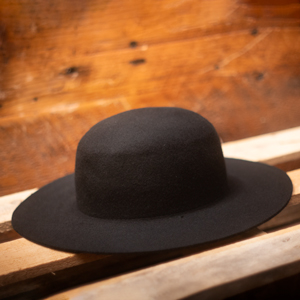 As cowboy hats have become more prominent throughout society, the styles have morphed from the traditional look to something ornate and elaborate. Today, the cowboy hat is not only serving its functionality with the modern rancher, but it has become a fashion statement. It is not uncommon to find cowboy hats at musical festivals or worn by tourists attempting to recapture an era and style firmly cemented by John B. Stetson a century prior.

Get the latest updates on new products and upcoming sales